No, this isn't a remnant of the 90s that someone forgot to take down. It's a screenshot of Marvel's website for Carol Danver's feature flick, Captain Marvel.

Yes, THAT Captain Marvel. The movie that was released in 2019.

Despite my favourite man being a huge super-hero comic book geek, I'm a little late to the amazingness that is Captian Marvel's website. (Because in this day of YouTube and Social Media, even promotional websites for movies are a little bit out-dated.) I stumbled on it by chance, and I have to say, I'm a little bit in love with it.

I haven't yet watched Captain Marvel, and up until seeing this site, I haven't really wanted to, but I'm told it's a straight-up, girl-power indulgent trip through all things 90s.

This promotional website reminds me of my beginnings in web design and marketing. It also stirs up nostalgia for one of my favorite decades and makes me want to see the movie.

Which is exactly what it was meant to do because *I* am the target market for this movie. Marvel knows who they made this movie for, and they know us well, which is why this horrifying flashback to 90s web "design" is brilliant marketing that works.

This website not only excites my marketing geek but gets my inner web design geek all riled up as well because it was actually built with FrontPage and is hosted on Angelfire, two more throwbacks to 90s web design. And their pandering to my inner geekdom doesn't stop on the frontend.

A peek at the code for this site brought me to this cute little bit of Internet nostalgia:

The entire site, just like the movie, is like diving headfirst into a big ol' pool of everything 90s and I'm totally fangirling over it.

When you know your audience, it becomes ridiculously easy to create messages that speak to them. So often, I have clients come to me wanting big, beautifully designed projects. While I love making things pretty, "pretty" should never be the first requirement, and oftentimes, it serves as a distraction from the purpose of your marketing - which should always be speaking to your audience. If your audience doesn't care about pretty, neither should you.

If you pay any attention to the forerunners of marketing at all (and you really should be if you want to be making an impact), you'll have come across Seth Godin. Seth has been a thought-leader in marketing for decades. He's published over 20 books on business and marketing and posts eye-opening articles on his blog daily. Yet his blog hasn't stylistically changed since the early 2000s.

There's no styled branding, no home page, not a single one of his posts contain images, and he's still rocking the left sidebar. It's even still called Seth's Blog. It's entirely simple and minimalistic.

He's not using a lead magnet to get you to sign up for his email list either; His subscribe form is just that. Subscribe or don't, but Seth's not bribing you to do so. 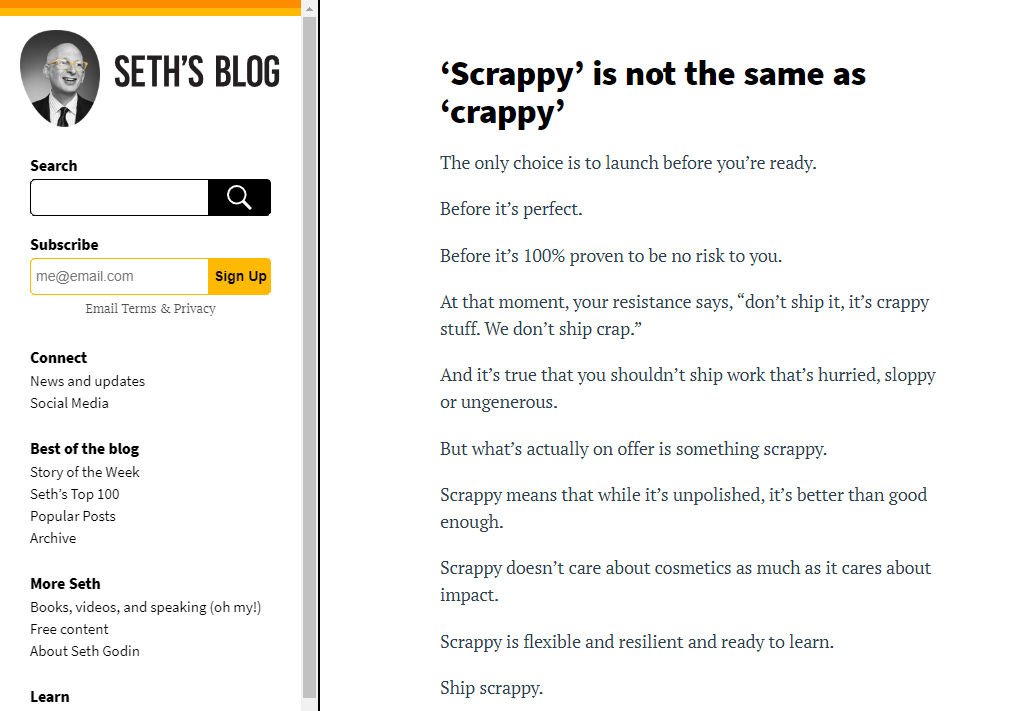 Seth knows that his audience is busy and comes to read his articles, so he gives them exactly what they want without having to search for it.

Marketing that Works isn't Created for You

The key to great marketing is knowing your audience. Who they are, where they are, and knowing how to speak to them.  Then creating all your messaging directly for them - using language they understand and colours that appeal to them. Take a page out of Marvel's and Seth Godin's books and give your audience what they want.

And if you're not sure how to discover what your audience wants, I'm always here to help.

Need help learning about your audience?

Marketing your business can be overwhelming, but you don't have to figure it out alone. I am here to help.

You have my guarantee that there is no sales pitch in this call and zero pressure to commit to anything. Just 100% actionable advice from a pro - for FREE! So go ahead and click that button, pick a time that works for you and let me know how I can best help you.